You know the saying “you don't see what's right in front of you?” I think it's true.

Having been born and raised in the northernmost province of Finland, Lapland, where there are more reindeer than people I had never really paid much attention to the term Arctic. Sure, I was used to the Lappish lifestyle of spending days in the wilderness, hunting, fishing and reindeer herding. Since a little girl I have always been very curious about the world and wanted to travel as far and as much as I can. That has resulted in not only having various stamps in my passport, but also gaining many unforgettable memories and experiences, like fishing piranhas in the Amazon, serving cocktails in a bar in the Caribbean, diving with turtles, doing voluntary work with iguanas – and the list just goes on. Most importantly, those trips and years spent abroad have given me perspective. But to truly understand the uniqueness of the Arctic region I needed to travel all the way to South Korea.

Last year I was selected to be the representative of the University of Lapland in the 1st Korea Arctic Academy which was held in August 2015 in Busan, South Korea. The Korea Arctic Academy was a one-week program comprised of special lectures, seminars and field trips to enhance the in-depth understanding of Arctic issues. I learned a lot about Korea’s polar research, maritime industry and Arctic policy.

While I was preparing my presentation for the Academy about Arctic tourism, I realized that it was what I wanted to specialize in.

In Korea I learned to see the Arctic from a very different angle. I started to understand the opportunities the region offers but also the vulnerability it has. It really was an eyeopening experience, and because of it I am now finishing my Bachelor’s thesis about Arctic tourism, more precisely about the clean air tourism in Lapland. The aim of my study is to find out what kind of meanings Chinese tourists give to the clean air of Lapland. I am also interested in knowing how they define Arctic purity, and if air quality can be a motive for travelling. 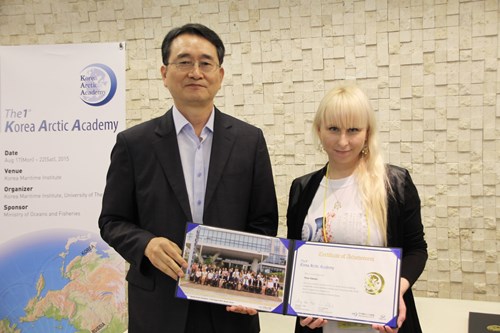 My research and the experiences I have had during the past year have taught me how fragile and precious the Arctic is. I needed to go far to see close. And sometimes even we, the inhabitants of this region, might not understand the value of it. As one of the Chinese tourists I interviewed said, the Arctic region is a “paradise, a snow paradise.”