My name is Elise Olsen, I'm originally from Sisimiut, Greenland. It's my fifth semester in studying Arctic Technology at The Technical University of Denmark (ARTEK).
Right now I have my internship in Greenland until summer, after that I will move to Trondheim (Norway) to study further.

I was one of the 19 international students who participated in the 2nd Korean Arctic Academy at The Korea Maritime Institute (KMI) July 2016.
I had heard about the event from our school. We got an email from one of the employees in ARTEK and found it interesting and send my application. I’ve had never heard of the event before, and wasn’t sure about what’s the purpose was, but I found the opportunity very unusual. Not only because I didn’t know anything about South Korea but also because it’s a great opportunity to meet some other Arctic people from different countries, and its make it more interesting because there priorities was indigenous people from the Arctic.

I went to South Korea in July 2016, with another Greenlandic who is studying social science. It was really nice that there was another Greenlandic person who participated in this event. It is always nice to have someone to discuss with in your own language, but also because we both know the issues and the conditions in our country.

Since I study Arctic technology, the event was very relevant for my studies. Not only the lessons about technology, but also the humanity things. The event gave me an overview about the Arctic issues, and I learned a lot about Korea, and also a lot about another countries. I speak 3 languages, my main language Greenlandic, Danish which is my second language and English as third. I became aware how important the English language is. My vocal English skills was very limited before the academy, now I have been improved my English skills and planning to study more English so I can be better to talk the language. 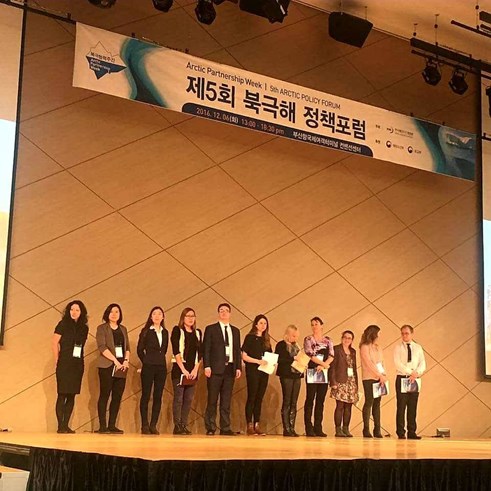