After a long travel in both distance and mind, I am now back in Tromsø, Norway. Our destination was Kolymskoe North East of Sakha Republic Yakutia, and the purpose was the UArctic EALAT Institute Workshop dealing with global challenges and perspectives of reindeer herders in the region.
The other side of the globe

With a time difference of 11 hours, it not surprising that you will meet a lot of differences from Sapmi. First of all the distances! From Yakutsk, we flew 3 hours north to Chersky, from where we drove 4 hours by car on the river Kolyma to the small village of Kolymskoe. Despite the size and its remoteness, Kolymskoe is home to 5 different indigenous peoples, Chukchi, Yukagir, Eveny, Evenki and Dolgan, with 5 different languages and traditions.

From my short visit I was only able to see the differences by their clothes, but I can imagine, that this also leads to many challenges considering the preservation of culture and language. I am impressed how (and if!) they manage to live side-by-side, in such a small remote place. Do we find anything like this in Sapmi? I have not heard about it. There are many Sami culture and language differences, but not as far I know, at the same small and remote place! 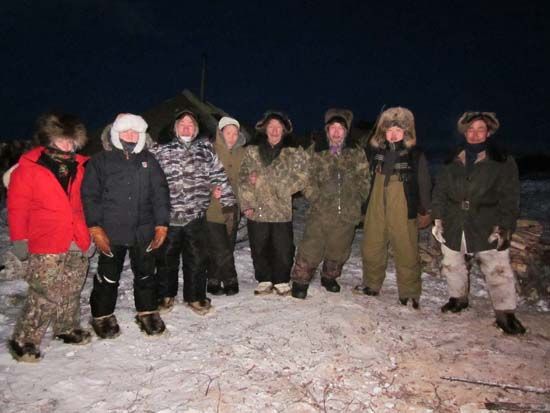 Through my studies at University of Tromsø I have participated in the UArctic EALÁT course Adaptation to Globalisation in the Arctic – The case of reindeer husbandry. My final paper studied the vulnerability and adaptive capacity of Mauken/Tromsdalen Reindeer Pasture District in Troms, Northern Norway. Through interviews of the herders, 4 years of participation in their herding practices and studies of the districts climatic history and future climatic projections, it reveals the herders strength against climate changes and reindeers vulnerability to the great encroachments of the pastures at the Norwegian coast.

I presented my research to the workshop in Kolymskoe, and the response from the regions herders was “I thought that there were no problems for reindeer herders in Scandinavia, due to globalization – technology, economy and organization – of the Sami reindeer husbandry. But now I see that other problems follow with it”. Compared to Sapmi, they have less or no encroachments by infrastructure and industry. Actually they see a potential for increasing the number of reindeer (by 60% - according to the governor of the Nizhnekolymskiy ulus, I.P. Suzdalov).

So what challenges do the Chukchi and Yukagir reindeer herders on the other side of the globe face? From the herder’s stories, the main challenge seems to be, that young people do not want to work with reindeer husbandry. In this region of Russia, most of the reindeer are owned by the state, and the herders are thereby employees, with a payment of only about 250 USD/month, 1/3 of the average nominal salary in Russia. Herders link the low salary with the lack of motivation for young people to work within reindeer husbandry. Another problem was the large distance to the school, and thereby the children were separated from the family and the herd most of the year, leading to the loss of their mother tongue, herding skills and interest in the herding life. Further challenges were connected to climatic changes, which were observed many places, constraining the pastures and the herds’ mobility.

In Kolymskoe we stayed at a small flat built in the 1950's, with 3 lovely ladies and a sweet 9 year old girl. It was cold, below minus 40 degrees, and all houses had 3 front doors to keep out the cold. But thick ice still formed on the windows. Even though we were not able to communicate verbally with our hosts, the stay gave me a small impression of the life of a herding family children and women.

Travelling to the herd I was thinking:
﻿
Tags: newsmember newsealatindigenous news