On 8-13 June 2008, two projects from the UArctic IPY Higher Education and Outreach cluster held a joint workshop at International Arctic Research Center (IARC) at the University of Alaska Fairbanks. At the workshop, K-12 teachers received training in the U.S. National Science Foundation (NSF)-funded IPY GLOBE Seasons and Biomes project and IPY Ice e-Mysteries project. GLOBE is a NASA-funded environmental science education program that works with teachers and classrooms around the world to link students with scientists studying climate change and to promote students to conduct their own scientific investigations of their environment. 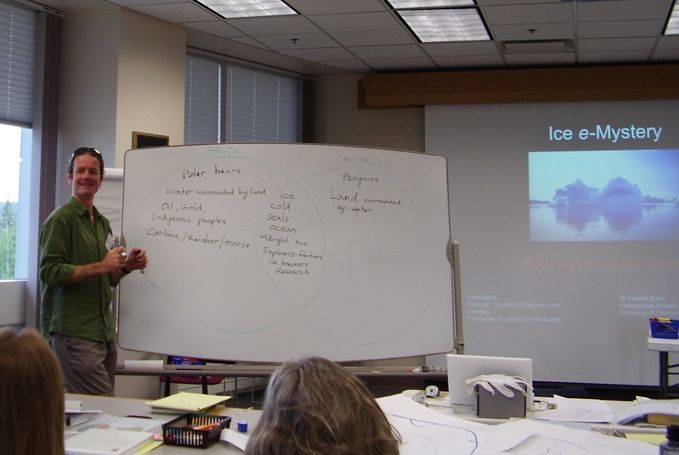 Seasons and Biomes is an inquiry- and project-based initiative that monitors seasons, specifically their interannual variability, in order to increase K-12 students' understanding of the Earth system. The Ice e-Mysteries project is an on-line writing collaboration linking science and literacy in partnered middle school classrooms in Alaska and Australia to create fictional storybooks with accurate polar science themes.

Fifteen teachers from around Alaska attended the workshop, coming from schools in Fairbanks, North Pole, Kenai, and Homer, as well as the bush communities of Kwethluk and Kasigluk. They spent three days learning how to set up study sites and collect data under the GLOBE Atmosphere, Freshwater Ice Phenology, and Plant Phenology Investigations. Additionally, teachers took part in activities pertinent to the nature of science (Why we need protocols), Earth System science (What causes the seasons? and Earth as a System poster activity), and how scientists use remotely sensed data (Using a GPS and Remote Sensing activity) that they could then take to their classrooms. Teachers were given time to practice with the equipment, protocols, and data entry on the GLOBE web site, discuss the pros and cons of using inquiry in the classroom, as well as listen to presentations by UAF scientists on global climate change (Dr. Larry Hinzman, Director of IARC), permafrost (Dr. Kenji Yoshikawa), and remote sensing (Dr. Dave Verbyla, School of Natural Resources and Agricultural Sciences).

Two days of the workshop were led by Dr. Sandra Zicus and Andrew Baird from Tasmania, who trained the teachers in the Ice e-Mysteries project. Teachers took part in an activity (Hatching a Crime) as an introduction on how to support the collaborative writing process. They received training on how to use the project web site to communicate with their Australian partner classrooms and some basic art techniques so they can teach their students ways to illustrate their books. They also learned about the Antarctic environment, how it is different from and similar to the Arctic, and took part in several science activities and discussion, as well as in conflict resolution activities, which will help them support students as they edit each others' works.

Both the IPY GLOBE Seasons and Biomes project and the IPY Ice e-Mysteries project are part of the UArctic IPY Higher Education and Outreach cluster. Seasons and Biomes is headed by Dr. Elena Sparrow f the University of Alaska Fairbanks, and the Ice e-Mysteries project, an exciting recent addition to the cluster, is headed by Mr. Andrew Baird from the Tasmanian Museum and Art Gallery and Dr. Sandra Zicus from the International Antarctic Institute and the University of Tasmania.