Fostering the next generation of Arctic researchers and managers

We’ve heard it many times: “You are what you eat.” The concept enabled college sophomore Annie Masterman to do cutting edge research connecting humpback whales to their diet.

Every organism has a distinct signature of stable isotopes like carbon and nitrogen. As a whale digests its food, the prey’s stable isotope “signature” is incorporated into the whale’s baleen. Based on the various levels of stable isotopes found within baleen, Masterman spent the summer reconstructing what humpback whales eat.

Masterman, who is originally from Bethel, Alaska, and now attends University of Alaska Southeast, conducted this research as part of an internship with the National Oceanic and Atmospheric Administration’s humpback whale monitoring project. The work began 30 years ago after the Exxon Valdez oil spill. Involvement in such research, though unusual for a student so young, is increasingly possible for undergraduates through several programs at the University of Alaska Fairbanks.

Including Masterman, 13 undergraduate students from universities across the United States spent the summer at UAF conducting research and learning about the Arctic. The students were hosted jointly by the International Arctic Research Center and NOAA’s National Marine Fisheries Service to gain exposure to interdisciplinary science and resource management careers. 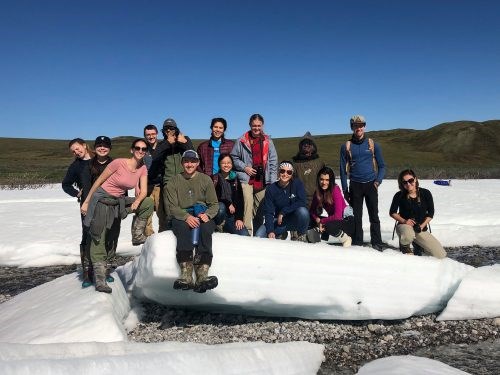 Five of the students were part of NOAA’s Partnership for Education Program Alaska, a regionally based marine education and workforce training effort housed at IARC as a result of a long-standing partnership between the two organizations. PEP AK students conduct course work at IARC and then apply their knowledge by completing internships at NOAA offices and labs in Juneau.

“This was one of the best experiences of my life,” said Kara Chuang, a senior at the University of California, Berkeley. During her nine weeks in Alaska, she interned with NOAA Fisheries’ Ocean Guardian School Program.

“My tasks were to gather resources and form a comprehensive curriculum for local Alaska schools,” she said. Chuang’s curriculum focused on promoting marine stewardship and conservation practices among youth. In addition to her education and outreach internship, Chuang documented her Alaska experience through video.

Individuals like Chuang motivate atmospheric sciences professor Vladimir Alexeev to work with students and promote programs that bring young scientists with new and creative ideas to UAF. For these programs to succeed, he said, “university support is extremely important,” especially when it comes to travel and fieldwork logistics.

This summer, eight REU students were paired with science faculty at UAF, engaging in projects that ranged from modelling the future size of a coastal glacier to examining changes in wind across the state. At the summer’s culmination, students presented their findings to a packed room of UAF researchers, family members and fellow young scientists.

“I’ve been working on a project with John Walsh about wind trends in Alaska,” said Sarah Pearl, from Dartmouth College. Their climate model output showed a trend toward more future storms in coastal areas where sea ice is retreating, potentially increasing the risk of coastal flooding and erosion. Pearl and Walsh, the chief scientist at IARC, are preparing to publish their findings in the journal Atmospheric and Climate Sciences next month.

“The changing Arctic demands new approaches to solving our problems,” explained Brix. “Resource management agencies like NOAA are called on to solve those problems, but they need the expertise and intellectual capacity of academic institutes.”

This is the third summer that REU students were hosted at IARC and the first summer for PEP AK. Both Alexeev and Brix hope that there will be continued support for the programs.