Thirty-eight teachers and teacher educators from around the world gathered at the University of Alaska Fairbanks (UAF) campus in late March to participate in a professional development workshop sponsored by UAF’s Monitoring Seasons Through Global Learning Communities Project (“Seasons and Biomes Project”), which is part of University of the Arctic’s International Polar Year (IPY) Education Outreach Cluster.
Led by Dr. Elena Sparrow and sponsored primarily by the U.S. National Science Foundation (NSF), the Seasons and Biomes Project engages pre-college teachers and students in climate change research to learn science and to participate in the International Polar Year. 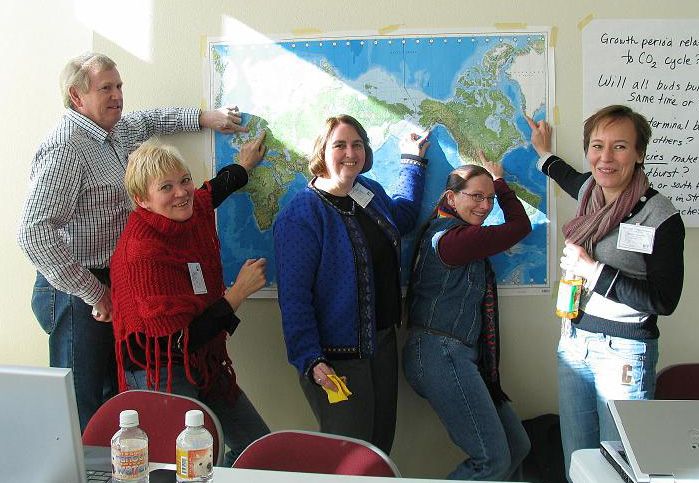 It employs methods used in the international Earth/environmental science Global Learning and Observations to Benefit the Environment (GLOBE) program (http://www.globe.gov), including studying Earth as a system and partnering teachers and students with scientists in ongoing physical and biological science investigations.
For this project, schools are organized by biomes and not by countries. Biomes include taiga, tundra, temperate and tropical deciduous forests, grasslands, savannah, hot and cold deserts, and agricultural and urban locales. Existing GLOBE measurements or protocols are being adapted to each biome and new protocols on fresh-water ice and mosquito phenology are being added for the Arctic/northern and tropical/equatorial regions, respectively.
The March workshop at UAF focused on the tundra and taiga biomes, freshwater ice freeze up and break-up and vegetation phenology protocols, IPY, and best teaching practices. Participating educators came from , , , , , , and , as well as from many parts of and several other states.
In addition, there were some very special participants: six former GLOBE students who are now college undergraduates, from , , , the , , and the , who will function as IPY ambassadors to their world regions, giving presentations and helping teachers engage students in collaborative IPY Earth system investigations such as the GLOBE Seasons and Biomes project.

An unusually wintery March in provided several attendees with their first taste of snow and cold. Workshop participants had the opportunity to experience other northern delights, including a permafrost tunnel that is a research facility, and the
﻿
Tags: news