I’ve been to Finland many times, but all my trips have usually ended with a visit to Helsinki. At my home university I studied the cooperation between Russia and Finland. That’s why spending a semester at Tampere University was interesting to me. The north2north program allowed me to implement most of my plans during my training.

The way of studying in Finland differs significantly from the Russian system. So, the semester is divided into two periods, during which I studied those subjects that are of most interest to me. But most importantly, Tampere University provides the opportunity to study on joint programs of partner universities. For example, I took one course from the Circumpolar Studies program. The course is called Introduction to the Circumpolar World and is organized by the University of Northern British Columbia. Tampere University has all the necessary infrastructure for study; teachers, curators and tutors are always in touch and ready to help.

The first time I came to Tampere was January 3, just after the New Year. After my arrival at the dormitory TOAS, I decided to explore the area and was amazed. All the houses were decorated, and it was impossible not to look at them, as the whole atmosphere resembled a real fairy tale. However, this can’t compare to the northern lights, which I was lucky enough to see more than three times.

My dormitory Lapinkaari is located near the Näsijärvi Lake, which freezes every winter. During this period, you can skate on its surface or just walk to Siilinkari lighthouse, which is located in the middle of the lake, where you can drink hot tea and take pictures in front of the lighthouse.

There is absolutely everything you need to spend an unforgettable semester in Tampere. At first glance the industrial city during the first days, completely opens up on the other side, because the nature of Tampere is amazing. 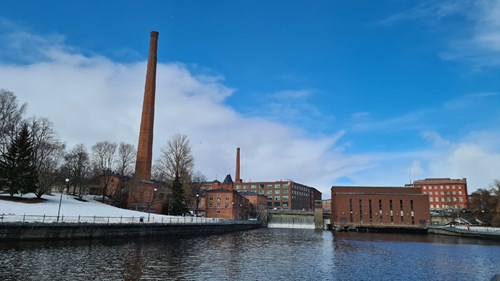 At the end I want to give some tips:

1) If you have the opportunity - visit Lapland, where the northern lights are the brightest;
2) Attend a game of Tampere’s Ilves local hockey team;
3) Skate on a frozen lake;
4) And most importantly - be careful, as the road in winter is sometimes slippery.